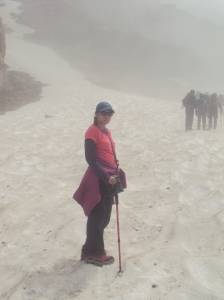 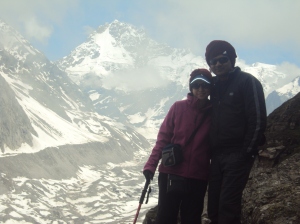 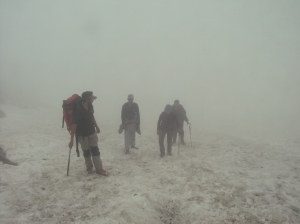 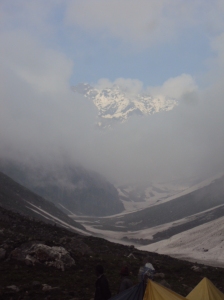 Pune-delhi- manali-HamptaPass After lots of yes & no’s regarding the trek goin with a trekking company or with a local guide, weather to trust the guide why to pay more to the trekking company, all these questions were settled one by one, I zeroed in on Mr Polu Thakur from Manali, one of the most experienced guide, I found his number from indiamike.com a very helpful travel community. Mr Polu Thakur Ph Number :-09816891591, he is one of the most knowledgeable & wonderful trekking  guide in this part of India.We landed at Delhi in the morning HPTDC Volvo is the only reliable mode of transport which leaves from  Himanchal Bhavan  in evening. We have to book tickets from HPTDC office which opens in afternoon at 2.00pm.We strolled around in Delhi which was real fun totally unplanned delhi tour here are the pic of dil walo ki delhi. 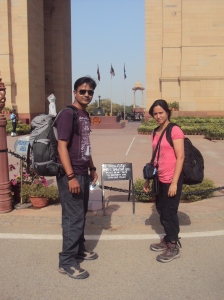 DAY 1   Way to manali from delhi one of the best road journey photo taken near Aut. over night journey was amazing early morning got up at near Aut and was surprised to see such beautiful highway serpenting around  a huge dam.the view was mesmerizing. Wifey was still sleeping .

Scary Highway  along takes you from one the best Scenic valleys on earth. Running away from the heavy city traffic opening your eyes to such beautiful morning was real awesome feeling. 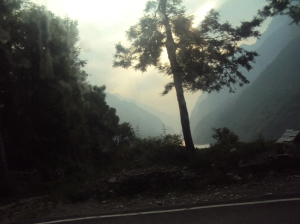 Tallest deodar ever seen in life 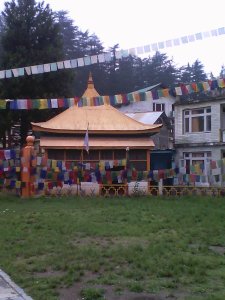 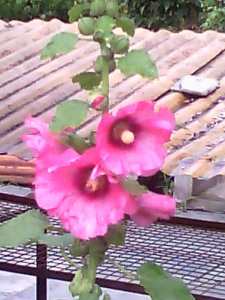 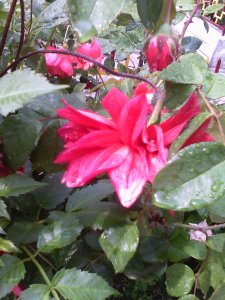 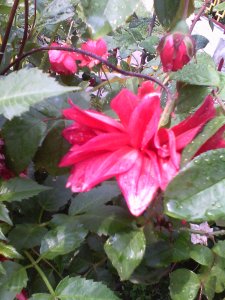 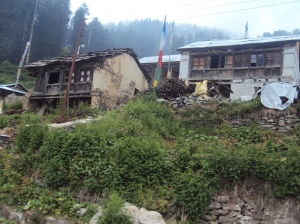 Our Guide Polu Thakur. Day1  of trek  Jorba to chika 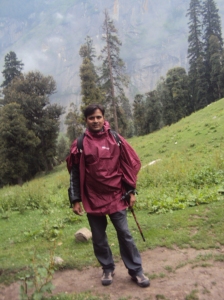 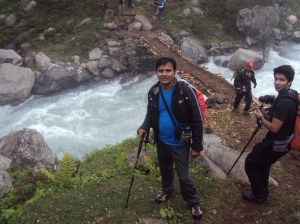 As we started our Trek form Jorba hydel project into this no mans land we were greeted by huge deodar & pine trees, Our trek started off with a mild welcome shower from mother nature it just purified my soul I felt welcomed by the Himalayas. First days walk was only for 4-5 Km but the terrain soon changed from forest to vast grass lands to huge boulders, we reached our base camp in an hour or so. As we unloaded our luggage, our trek lead took us for a small hike for acclimatization. I was worried not to wear my self off by over exertion. We were full of excitement never been in such wilderness. no smoke, no vehicles, no sound machine, the only music played in the back ground was of the calm river Rani Nala flowing in its full fledge glory, I had planned to do this trek with my guide & wife, being in the group brings all the human feeling of groupism, regionalism,  all other crazy human feelings from which I am always running after in our real life. 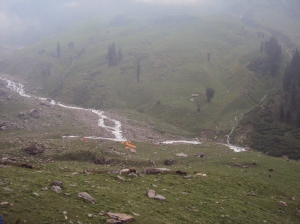 Our base camp at Chika pic taken from our small hike to near by mountain. By evening we had settled in our tents we had our first & last campfire as there wont be any dry wood found in next few days of our trek. Next day morning was amazing feeling early morning getting out of our warm cocooned sleeping bags & tent. It was difficult to get out in the chilled Himalayan morning, brushing our teeth in ice cold water sittin g near the river silently & watching the wild terrain, was just I dreamed of. I was so happy to be there, we had a very nice heavy breakfast hot tea in such cold is pure bliss. 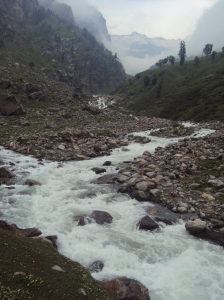 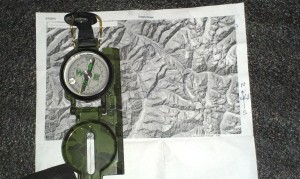 Day Two Chika to Balu Ka Gera We left from Chika to balu ka gera, the terrain now was changing form grasslands to  hard core rock valleys. the terrain was difficult to cross as one wrong step & definitely one lands up with plaster for sure, still it was fun , the snow was melting & we could see the remains of tiny glaciers, with snow patches 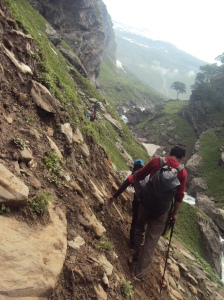 After navigating our way through rocky  steep & deep valley’s we reached Balu Ka  Gera  know as  heaps of sand no such heap was seen but the area is a flat grassland with residual of fine sand carried along the Hampta nala trapped between valley two huge Himalayan mountains on either side  the view was one of those from the lord of the rings or harrypotter movies. 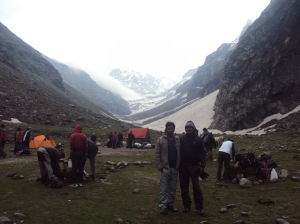 As we ascended and gained altitude I was feeling a bit of pain in my head & was its not the start of  Altitude sickness(AMS) , Our guide told us it might be due to weight we are carrying. By the time we reached our camp I had a sever head ache & had to help my self with some crocine. We reached our base campby 3 O Clock, I had a nice 2 Hrs of sleep woke up fresh & was fine . the evenings we spent were trolling & exploring the nearby area. We just could not keep ourself away from snow since childhood I had seen snow only in pic & movies to to see such quantity of snow & glacier I was just astonished, we went for small hike in snow , Our guide gave us a short training on how to walk on snow since next day we would be crossing snow & river, we were shown different techniques of walking on snow with crampons. After our hike we just relaxed  exploring the nearby valley.the dinner as always was served hot & delicious. I could not take the pics of night sky. If you just stand & stare in the dark sky I felt like I was looking at our milkyway, never in my life have I seen such huge number  of  twinkling stars staring down at you one fell if you stretch out your hand you can touch them, the terrain make the so beautiful it just gets the calmness inside you to new high. That was one of y most peaceful night in my life. Setting up camp at Balu Ka Gera. Day3  Balu ka gera- sheaogoru via Hamptapass. I just in love with the Himalayan mornings there is unique freshness in the air I the morning. We were asked to use the toilet tents but I could not resist the pleasure of downloading in the open skyies of Himalayas.  The only problem I faced at Balu Ka Gera was to find a morning spot,  as the terrain is such that from anywhere anybody can be seen. Our morning breakfast a long with the kadak chai in our tent was the best ever leisure I can get …. This day was long & the trek was treacherous , We were excited as we we were gonna cross Hampta Today along with it we also had to cross a bone chilling Ice cold treacherous Hampta river. Today were give a light lunch and few candy bars. 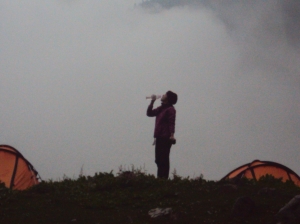 Early morning view from our tent. 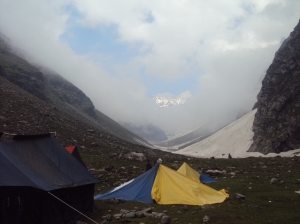 Huge waterfall seen on our way to hampta this was gonna be our longest hike in the trek , I was have problem of breathlessness so unloaded my luggage & foolishly gave away all my reserve food & gloves & caps.

Snow Snow & lots of snow……….. just astonished we were doing this trek I was not expecting so much snow in the month of july 2014 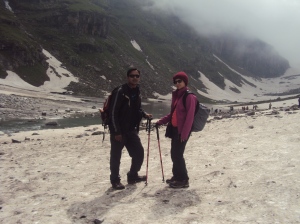 After the patch of snow ended We traversed through a beautiful valley of flowers. 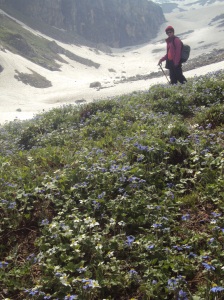 Our life support our chef & his friend. 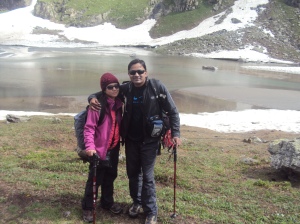 After these grasslands we crossed a rocky terrain and then were face by worst fears of my life .We had to cross the hampta nala barefeet in a freezing cold bone chilling water 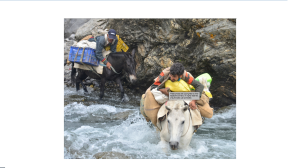 Warming & Drying off our feet after crossing the streme. W had lunch & moved on ahead with our mission Hampta. Trust me the hike is treacherous & dangerous It just oes not end the beauty is also mesmerizing. here are our hampta & are pics At Last with the lve of my life @ 14500 Ft Hampta Pass we are through.the visibility was 5 mtr we could just could not see any mountiain or the terrain, it was freezing cold, but to reach there & achieving the highest point of our trek.

Descending Hampta Pass  was one hell of a daunting task ahead of us the terrain suddenly changes from zero visibility snow covered mountains to clear rugged mountains, it connect lush green  kulu valley to ice cold arid lahaul valley,  as we crossed the cloud cover and started our descent we had a majestic view of deotibba